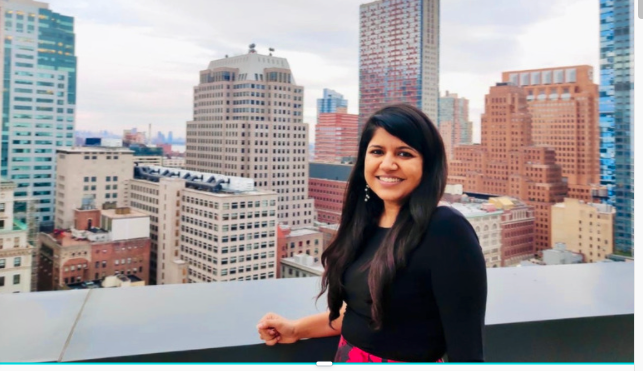 Class of 2010
Siya Raj Purohit
Siya Raj Purohit has had quite a decade since graduating from Westlake Academy in 2010. She began at Westlake as a Junior and graduated with 23 peers in the first graduating class. Siya fondly remembers the close relationships she had with her teachers and recalls how they went above and beyond to help students - supporting internships, extra-curricular activities, and celebrating wins together. After graduation, Siya studied computer engineering at the University of Texas at Austin and, before her 19th birthday, she published a book entitled “Engineering America.” The book contained her research on America’s jobs-skills gap, including interviews with national figures such as a Nobel Laureate and a Supreme Court attorney.
Prior to attending graduate school at Harvard University, Siya worked at Udacity, a Silicon Valley startup, where she launched education products with Google and Georgia Tech. Today, Siya runs her own venture capital fund, Pathway Ventures, to invest in promising new startups that need capital to realize their goals. Her focus? Preparing people for the jobs of tomorrow. Siya credits her time at Westlake for giving her the confidence to build her own projects. She has shown this from her CAS project as a DP student where she recycled computers for villages in India to building startups in Silicon Valley to now literally helping others build companies. Building knowledge, building relationships, and building the future of business - this could be the title of her next book. There is no doubt that her Blacksmith memories would make it in the prologue.
Scarlet Ganesh
Class of 2015

Scarlet Ganesh not only graduated early from the University of Texas at Arlington but she already has a job secured with Charles Schwab in Westlake! In December, this class of 2015 graduate graduated a semester early with her Bachelor of Science degree in Information Science.

When asked how an IB education prepared her for college, Scarlet said “...IB prepared me for college as it taught me how to be well-balanced and utilize my time management skills.”

Scarlet just began working for Charles Schwab as a Business System Analyst, where she uses her skills as a communicator to serve as a liaison between the business leaders and the programmers when working through data challenges.

Scarlet’s advice to current WA students? “It’s OK to fail, but never give up!”

Sophia Maas is a sophomore at New York University (NYU). Sophia has just begun NYU’s Undergraduate Leadership Honors Course Cohort for this Spring Semester, 2019.  The program is very competitive and focuses on high-achieving sophomores who are good candidates for prestigious national and international post-graduate fellowships, scholarships and leadership programs.

Class of 2014
Rachel Whitbeck
Rachel Whitbeck graduated from Westlake Academy in 2014, a member of the fifth graduating class. After graduating from Oklahoma State University, she followed her dream of working for a non-profit. She currently holds the position of social media coordinator for Kids Matter International, a non-profit that serves children locally, nationally, and internationally by providing the necessities needed to improve their lives. This includes new clothing, literacy initiatives, and other programs to ensure a child's success. This desire to work in a non-profit perhaps grew from the medical mission trip that she participated in while at Westlake Academy, which remains to this day her favorite high school memory.
When asked how Westlake Academy prepared her for college and career, Rachel commented, "... Westlake Academy taught me to appreciate different points of view that I might not have thought of or agreed with and time management skills that are so critical." She appreciated the time spent to teach valuable critical thinking and presentation skills that allowed her to be successful in college.
Class of 2014
Hayden Barber
Hayden Barber graduated from Westlake Academy in 2014, a member of the fifth graduating class. He went on to study Sports Marketing at Oklahoma State University and was pleasantly surprised at how prepared he felt for college life. When asked the question, How well did Westlake Academy prepare you for college, he replied:  "Even better than I imagined it would. College was at least 10 times easier than high school for me."
Hayden touched on how participating in the football program at Westlake provided him with great memories and the friendships forged while on the team are still some of his best today.
Upon graduation, Hayden moved to Wichita, Kansas where he covers high school sports for The Wichita Eagle. His career pursuits were inspired by his favorite teacher, April Harrell, who he said, "...pushed us so hard every day, and I think that’s a big reason I consider myself successful today."