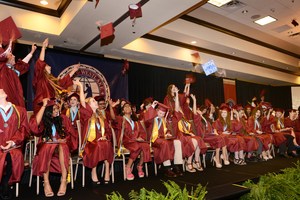 Students continue to surpass statewide averages in all four of the state’s performance indexes, and the Academy earned all seven Distinction Designations for academic achievements.

In addition, all three of the State System Safeguards were met for Performance Rates, Participation Rates, and Graduation Rates; and End-of-Course results not only surpassed the state averages, but topped the school’s results from last year. Averages for both the ACT and SAT reveal Westlake Academy students surpassed state scores in all subject areas. Attendance and Graduation Rates outperformed state percentages, as well as Advanced Course Completion Rates and College Readiness Results.

For Westlake Academy educators, responsibility to students extends beyond grade 12. Westlake Academy’s goal as a college prep school is to create college ready students prepared to successfully compete in a global marketplace. To measure success, school administration began tracking the graduates to see how they are progressing in college life. Data is collected via the National Student Clearinghouse, which captures data from 93 percent of colleges. According to the most recent data, Westlake Academy students are succeeding the national graduation rate.