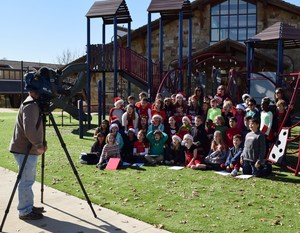 Photojournalist Peter Watson came out during the G4 recess "sit-in" for a story about their terrific efforts raising money for LIMBS International!

Westlake Academy fourth graders did a terrific job for CBS Photojournalist Peter Watson, who came out during their recess "sit-in" for a story about their terrific efforts raising money for LIMBS International! The goal when they began this project was to raise enough money to provide four people with prosthetics. As of today, they have raised $5,000- enough to help 15 people!! Way to go G4! The story airs Dec. 17 on CBS11 during the 4 p.m. show.

WA Fourth Graders are raising awareness and collecting money to help provide prosthetic limbs to amputees in impoverished countries as part of a LIMBS International global awareness campaign. After many great suggestions and much discussion they agreed on the campaign slogan, “Give Hope and Change Lives with LIMBS!”

As a show of support for those students who are without limbs and cannot participate in outdoor activities, on Dec. 17 the students did a sit-in” during their recess time. The fourth graders are collaborating with other students in Buenos Aires, Mexico and Coppell with the goal of joining together, though miles apart, to help solve an issue faced by children around the world.