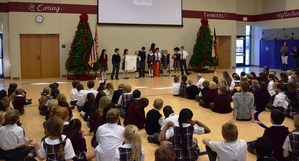 Westlake Academy Fourth Graders are taking the spirit of giving to a whole new direction this holiday season.  Between now and Dec. 18, they are raising awareness and collecting money to help provide prosthetic limbs to amputees in impoverished countries as part of a LIMBS International global awareness campaign. As a show of support for those students who are without limbs and cannot participate in outdoor activities, the students are even planning a “sit-in” during their recess time.

The fourth graders are collaborating with other students in Buenos Aires, Mexico and Coppell with the goal of joining together, though miles apart, to help solve an issue faced by children around the world. Last week, the students began brainstorming, planning, and deciding on a message for their campaign.  After many great suggestions and much discussion they agreed on the campaign slogan, “Give Hope and Change Lives with LIMBS!”

During opening Flag Dec. 7, students shared their plan and described steps they will take to bring awareness to LIMBS International:

“We have set a goal of ‘4 for Four’. . . $1,200 would buy four pairs of prosthetic limbs for  amputees in an impoverished country. We are even planning a “Non-Walk” recess on Thursday, Dec. 17 to reflect on what every-day life might be like for a person who has lost a limb due to disease or illness.”

“We invite you to share in our campaign and help us bring awareness to LIMBS International. This season of giving is the perfect time to share our time, talent and treasure in helping others! We invite you to join us!”

The student’s first commercial was shared with parents and teachers last week, and they have placed posters around campus. For the next two weeks, students will implement their plan and monitor success. They registered the campaign with LIMBS International, and donations will be accepted through their website.

“I am really excited for this - the 'sit-in' makes me a little nervous because sometimes when I sit too long I freak out,” said student Madison Corzine. “But when I saw a picture of a little girl living in a cardboard box and living without an arm and I realized how much our help would impact her life it made me realize that our help can make the world a better place."

Student Nicole Ndolo said, “I think it's very generous - I mean the fact that we can change a life - give someone a chance at a job again. And it's really neat because we will get a letter from them letting us know how they are doing."