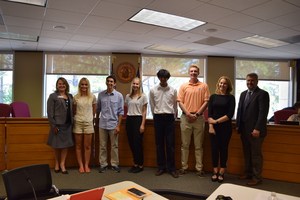 About 20 percent of the 2.1 million students worldwide who took AP Exams performed at a sufficiently high level to earn an AP Scholar Award.

During the September Board of Trustees Meeting, the students were recognized for their achievement.

Victoria Kubyshko was also named a semifinalist in the 2016 National Merit Scholarship Program. Victoria is one of about 16,000 scholars nationwide who will compete for more than $32 million in scholarships next spring. And Andres Martinez-Murillo has been named 2015-2016 Scholar by the National Hispanic Recognition Program for excellence in academic achievement.

“By taking AP exams in grades nine through 11, these students challenged themselves beyond the IB curriculum of study,” said Stacy Stoyanoff, DP Principal/DP Coordinator. “They are now IB Diploma Candidates and AP Scholars, as they begin their applications to colleges and universities. This is a tremendous achievement!"